The Black Hole that is Music Teaching 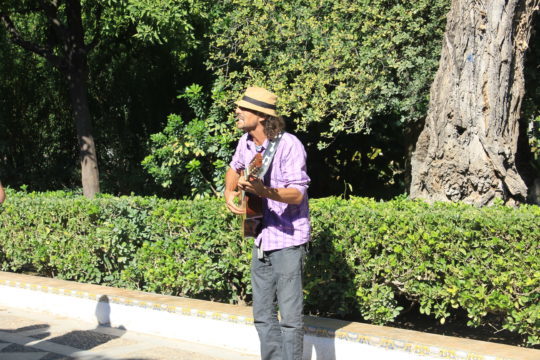 Back in 2011, during my initial years at Theme Music, I became really interested in teaching methods for the Guitar. I had been playing (read noodling around on) the instrument for a little while before that with fairly decent results for the amount of practice I was putting in. After dropping some money into a passable chinese acoustic steel string instrument, purchasing a couple of technique and method books, and wanting to play some John Mayer, I was well on my way towards a journey undertaken by what would seem like thousands of beginner players of all ages.

Cut to a year later, the guitar was lying on top of an aluminum cupboard in the house and I am yet to figure where those books went. Truth be told, I tried a lot to play; and the effort was both consistent and methodical. I was trying to read staff, play exercises and scales and trying to develop finger strength. These were things that I had done before as well, while I learnt to play the violin in school. However, as I soon realized, being coerced into practicing daily by an enthusiastic parent is vastly different from motivating yourself to pick up something new as an adult while you wait indefinitely for a sign of visible progress.

So why is this story familiar? Do you have an instrument somewhere in storage at your house? Did you not purchase one for the fear that this might happen? Do you enrol your child in music class and wonder if it is a prudent decision to buy them a nice instrument ‘at this moment’? Let us try to understand why this is a common situation.

Even though our focus for this article is guitar teaching, a lot of this applies to any instrument. For this part, let us concentrate only on children (for the purpose of our discussion, a child is between 3 to 15 years of age).

There are two primary factors involved in the decision making process to put a child into music class:

Let’s go back to school for a minute. Think about one subject that you loved and one that you hated. Unfortunately, you had to work on the both of them all the same. For me, I loved English and loathed Mathematics. If I had the choice, I would read books all day and not give two hoots about square roots. But I was a ten year old child, whatever did I know. My mother was certain that if only I paid more attention, I would get it (you could substitute mother for dad, older sibling, tutor, teachers, pretty much any adult who would think the subject is a breeze). It was only years later that I realized that I did not need to understand calculus to live peacefully; basic mathematics would suffice. And that is the catch.

If you have a child and you want said child to learn to play music, there is a lot more to be done than simply enrolling them in the best school you can afford. It is similar to how there is no guarantee that the child will absolutely love every subject they learn about in academic school just because it is the ‘best’ one in the city. To instill a love for the languages, you read books to them at night and encourage them to find new words. For science, you take them to fairs and give them a sense of observation towards their surroundings. Why should it be any different for music?

This is how our two factors are linked. Before it comes down to any music classes at all, parents need to motivate and inspire their wards to listen and comprehend. Begin with nursery rhymes, singsong folk tales and clap together. Disney is a forever resource on tailormade children’s songs. Motivate and expose. The academia come in a lot later.

The specific physical aspect of playing the guitar is an important consideration. For children the instrument is often big to comfortably handle (even though smaller ones are available, you don’t get to see them that often). Add to that contorting your fingers into curves and shapes to play thing strings made out of steel. Add to that using multiple fingers at the same time trying for the first time to get a hold of your fine motor skills and muscle memory. Add to that; YouTube.

Everyone has seen a YouTube video of somebody playing guitar. There are music videos, playthroughs, tutorials and rig rundowns of pretty much every song and professional player out there. What one does not see are the ten years that person probably spent trying to be good enough to put something on video. The patience that went into getting the clearest C major chord possible. The 100 hours of playing that lick at 60 bpm to prepare for 120. Maybe they should make more videos for that.

When you (parent/child) go onto YouTube and watch Dave Gilmour serenading and Jeff Loomis shredding, take a minute and go to Justin Sandercoe’s channel and run through the first few lessons there. If you find yourself dozing off on the second minute of a three minute video, maybe this isn’t for you. On the flip side, if you find your fingers trying to replicate the instruction in thin air, maybe this is for you and classes are in order.

Once you’re there, it is the responsibility of the music school to educate the parent as much as the child. They need to be told that there is a direct correlation between effort expended and results obtained. But that is not enough. The teacher has to inspire for sure, but that interaction is for an hour a week. The parent child interaction is for much longer and therefore has a bigger impact on their lives. Teacher rely on parents to reinforce class matters and the better help they get, the better they are at their jobs. It is truly a team effort with multiple stakeholders with the potential of inspiration striking from anywhere. When the right expectations are set between them all, the journey is so much more fulfilling and productive.

Actually when someone doesn't know then its up to other
viewers that they will help, so here it occurs.

My family always say that I am wasting my time here at web,
but I know I am getting familiarity every day by reading thes fastidious posts.

Hi there! I could have sworn I've been to this
site before but after checking through some of the post I realized it's new to me.
Anyhow, I'm definitely delighted I found it and I'll
be book-marking and checking back often!

Hey, I think your site might be having browser compatibility issues.
When I look at your blog in Firefox, it looks fine but when opening in Internet Explorer,
it has some overlapping. I just wanted to give you a quick heads up!
Other then that, awesome blog!

I read this paragraph completely about the comparison of most recent and earlier technologies, it's remarkable article.

When I initially left a comment I appear to have clicked the -Notify me when new comments are added-
checkbox and now each time a comment is added I get four emails with the exact same comment.

There has to be a way you can remove me from that service?
Many thanks!

I really love your site.. Great colors & theme. Did you create this amazing
site yourself? Please reply back as I'm looking to create my very
own blog and want to know where you got this from or what the theme is named.
Appreciate it!

I just could not depart your web site before suggesting that I really enjoyed the standard information an individual supply on your guests?
Is gonna be again regularly in order to check up on new posts

Hi to all, how is all, I think every one is
getting more from this web site, and your views are fastidious for new visitors.

I appreciate your piece of work, appreciate it for all the good blog posts.

A lot of thanks for all of your labor on this website. Debby enjoys conducting internet research and it's simple to grasp why. We all know all about the dynamic ways you produce practical guides via the web site and strongly encourage participation from people on that topic while our own daughter is always becoming educated a whole lot. Enjoy the remaining portion of the new year. You are doing a remarkable job.